Naïlo’s father, Xen’kar, was an outcast in drow society. He was a CG wizard and avid researcher. As a young adult, he fell in love with a cleric of Lolth, Kirris. Initially, she wanted nothing to do with him as she saw him as a traitor to their kind with his “goodness,” but after almost a decade of courtship he finally won her heart and they were married. Shortly after the marriage, Kirris was outcast by Lolth and lost a substantial amount of her abilities, leaving her near-crippled for over a year. The couple decided to move to the surface of Miryzeen for their safety. They cast away their drow names for surface elf names – Ivellios and Drusilia Galanodel. Once settled into their new home, Drusilia sought rehabilitation and in the process became a fighter. Her husband also taught her how to bring out some of the magic that flowed through the veins of all elves.

Over the centuries, they had 13 children – an abnormally large family for elves, but the Galanodels were quite lonely on the surface. The names of the first 12 have been lost to history, but the youngest – Anasilia Galanodel – could not be forgotten. Growing up, all of the children were well behaved and respectful except for Anasilia; she resented everyone and everything and always had an air of malice around her. At the age of 10, she ran away and joined the church of Lolth. At the same time she discarded her surface elf name for one more fitting – “Naïlo.” Shortly after, Lolth herself appeared to Naïlo, causing her skin to be covered in fine white spider web designs. On her 15th birthday, Lolth informed Naïlo of a prophecy that the 13th child of traitors would bring about the reclamation of the world. Lolth also granted her a boon for her birthday – a spider companion whom she named Cylian.

Shortly after Naïlo turned 20, the Drow Rebellion began. The Galanodel family fled to Drogora for protection, dragging the reluctant Naïlo with. After their first week in Drogora, Lolth again appeared to Naïlo, this time charging her with a mission to grow and learn; to better herself and gain power to better serve the Goddess. The next morning Naïlo left her family without saying another word and began travelling the world. As she grew in power, her connection to Lolth also grew in strength. By the time she was 40, she was legendary throughout the Underdark, and known to be Lolth’s own creature. Feeling she had strengthened adequately, she returned to her family in Drogora. Upon arriving, she methodically slew each of her siblings. As she was attempting to kill her mother, her father drove her off – just barely. (IBI Note: Naïlo’s siblings were resurrected the next day by a half-dragon cleric by the name of Vaerx.)

Filled with rage, she returns to Miryzeen to serve as the General of the Drow Rebellion. With a little help from Lolth, Naïlo rises to power over the course of 70 years. As she gains more power and rises in the ranks, the drow attacks on the surface become more and more brutal.

See Drow War for the progression of the Drow Rebellion and Drow War. 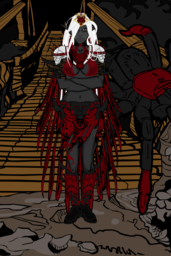